Copr is going to remove build data from end-of-life chroots. Read this article to learn your new responsibilities in case you want to keep some software alive even for an EOL distribution.

Even though Copr currently supports building packages for Fedora, EPEL, Mageia, let’s talk about just Fedora to keep this article simple. The same principles apply also for other distributions, they only differ in small nuances such as length of the release cycle.

Let’s briefly talk about the Fedora release cycle. There are always two stable versions (at this point F28 and F29) and rawhide. These are enabled in Fedora build systems and you can build packages for them. Once a next version is released, the oldest one gets marked as End Of Life (EOL) and it is not possible to build official packages for it and push updates. In Copr, we try to give users more time to migrate and allow them to build packages even for EOL version for another several weeks/months.

Now we are getting to the actual topic of this article. Can you guess, what happens with the repositories once the chroots for a particular EOL distribution gets disabled? Interestingly enough, nothing happens to them. If you have created a project in the Copr humble beginnings and built some packages for e.g. F21, you can still boot your old laptop and install them. As awesome as it sounds, we are changing this a little.

What does it mean

Starting today, you will once upon a time receive an email saying that your projects have some builds for a chroot, that is now outdated. You will be informed, that the data in the chroot are going to be deleted in 180 days unless you take an action. By doing so, you will be able to prolong the amount of time until the data are deleted. You will never be able to turn the garbage collector off, but if you really care about the data, you will be able to periodically prolong the time upon deletion and keep them indefinitely. Please be aware, that from the beginning, the preservation time will be temporarily reduced to only 60 days because we need free some disk space as soon as possible.

Of course, I got this one from devel instance, that’s why there is a link to localhost. You will receive one email notifying you about all your projects (not one email per project). We chose this option to avoid unnecessary spamming.

You can read the Copr outdated chroots removal policy if this change affects you.

Why do we need it

Long story short, we are quickly getting out of disk space. Our daily consumption continually grows and we currently store about 10GB/day. During last year we have used 2TB and we are accelerating, so for this year, we are going to need even more. Assuming the same growth as in the past, we will consume up to 2.5TB and the following year up to 5TB.

See this graph of Copr data consumption since the start of the project until now. The data were collected by @msuchy and presented on Fedora infra mailing list. 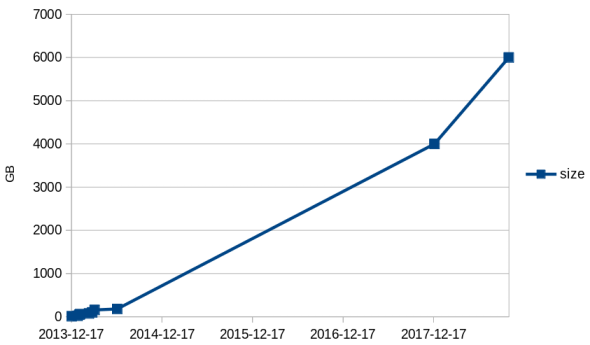 Let’s see how much disk space was needed for particular Fedora releases.

We also have an idea of how much data is required for alternative architectures in comparison to Intel.

So, we are going to remove some old data, that is a bad thing. But it will have many positive consequences. Most importantly, it will allow us to survive (regarding disk space) this year. This alone is a sufficient reason because we are slowly running out of options to store some space. Also, we want to add some features. For example, from the table above we know, that alternative architectures don’t require that much disk space and with Mock’s forcearch we have a possibility to support them without having dedicated builders on that architecture. We definitely aim to support aarch64! For a quite long time, we have also been discussing a possibility to build OSTrees for Fedora Silverblue project and containers, but it always wrecked on not having enough disk space. We might revisit these ideas again.