Rebuilding the entire RubyGems in Copr

We took all 166 699 packages from RubyGems.org and rebuilt them in Copr. Let’s explore the results together.

From the 166 699 Gems hosted on RubyGems.org, 98 816 of them were successfully built in Copr for Fedora Rawhide. That makes a 59.3% success rate. For the rest of them, it is important to distinguish in what build phase they failed. Out of 67 883 failures, 62 717 of them happened while converting their Gemfile into spec and only 5 166 when building the actual RPM packages. It means that if a Gem can be properly converted to a spec file, there is a 95% probability for it to be successfully built into RPM. 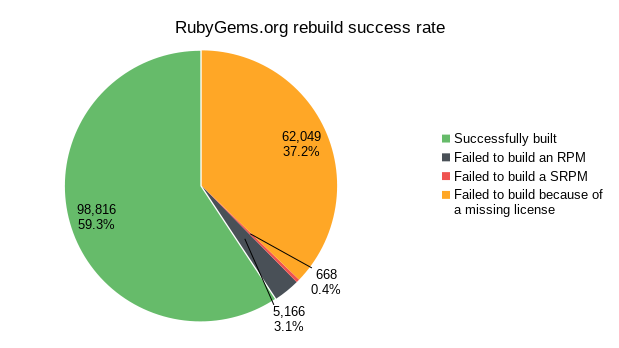 By far, the majority of failures were caused by a missing license field for the particular Gems. There is likely nothing wrong with them, and technically, they could be built without any issues, but we simply don’t have legal rights to do so. Therefore such builds were aborted before even downloading the sources. This affected 62 049 packages.

The resulting RPM packages ate 55GB per chroot, therefore 110GB in total. SRPM packages in the amount of 640MB were created as a byproduct.

The repository metadata has 130MB and it takes DNF around 5 minutes on my laptop (Lenovo X1 Carbon) to enable the repository and install a package from it for the first time (because it needs to create a cache). Consequent installations from the repository are instant.

To realize if those numbers are anyhow significant or interesting, I think we need to compare them with other repositories.

What was the point of this experiment anyway?

The goal was to rebuild all packages from a third-party hosting service that is specific to some programming language. There was no particular reason why we chose RubyGems.org among other options.

We hoped to pioneer this area, figure out the pain points, and make it easier for others to mass-rebuild something that might be helpful to them. While doing so, we had the opportunity to improve the Copr service and test the performance of the whole RPM toolchain against large repositories.

There are reasons why to avoid installing packages directly via gem, pip, etc, but that’s for a whole other discussion. Let me just reference a brief answer from Stack Overflow.

Surprisingly enough, the mass rebuild itself wasn’t that challenging. The real work manifested itself as its consequences (unfair queue, slow createrepo_c, timeouts everywhere). Rebuilding the whole RubyGems.org was as easy as:

Contrary to the common belief, unlicensed software, even though publicly available on GitHub or RubyGems, is in fact protected by copyright, and therefore cannot be legally used (because a license is needed to grant usage rights). As such, unlicensed software is neither Free software nor open source, even though technically it can be downloaded and installed by anyone.

If I could have a wishful message towards RubyGems.org maintainers, please consider placing a higher significance on licensing and make it required instead of recommended.

There are also 3 157 packages that don’t have their license field set on RubyGems.org but we were able to parse their license from the sources. https://gist.github.com/FrostyX/e324c667c97ff80d7f145f5c2c936f27#file-rubygems-license-only-in-sources-list

It turns out DNF handles large repositories without any major difficulties. The only inconvenience is how long it takes to create its cache. To reproduce, enable the repository.

And create the cache from scratch. It will take a while (5 minutes for the single repo on my machine).

I am not that familiar with DNF internals, so I don’t really know if this is something that can be fixed. But it would certainly be worth exploring if any performance improvements can be done.

We cooperated with createrepo_c developers on multiple performance improvements in the past, and these days createrepo_c works perfectly for large repositories. There is nothing crucial left to do, so I would like to briefly describe how to utilize createrepo_c optimization features instead.

First createrepo_c run for a large repo will always be slow, so just get over it. Use the --workers parameter to specify how many threads should be spawned for reading RPMs. While this brings a significant speedup (and cuts the time to half), the problem is, that even listing a large directory is too expensive. It will take tens of minutes.

Specify the --pkglist parameter to let createrepo_c generate a new file containing the list of all packages in the repository. It will help us to speed up the consecutive createrepo_c runs. For them, specify also --update, --recycle-pkglist, and --skip-stat. The repository regeneration will take only a couple of seconds (437451f).

On the other hand, appstream-builder takes more than 20 minutes to finish, and we didn’t find any way to make it run faster. As a (hopefully) temporary solution, we added a possibility to disable AppStream metadata generation for a given project (PR#742), and recommend owners of large projects to do so.

From the long-term perspective, it may be worth checking out whether there are some possibilities to improve the appstream-builder performance. If you are interested, see upstream issue #301.

The month of September turned into one big stress test, causing Copr to be temporarily incapacitated but helping us provide a better service in the long-term. Because we never had such a big project in the past, we experienced and fixed several issues in the UX and data handling on the frontend and backend. Here are some of them:

To achieve such mass rebuild, no special permissions, proprietary tools, or any requirements were necessary. Any user could have done it. In fact, some of them already did.

But don’t be fooled, Copr can handle more. Will somebody try Npm, Packagist, Hackage, CPAN, ELPA, etc? Let us know.

I would suggest starting with Copr Mass Rebuilds documentation.